Sometimes unremarkable times are actually the ones I find myself wanting to remember.

I picked P up from her day care late this afternoon, whistling as I walk in the door. Any time I walk into a space in which Kate or Piper can hear me, I give the same little three note whistle I’ve used for years to announce myself – tonic, dominant, major-third. Piper hears this and comes excitedly running out to meet me.  She pauses for a second, looking past me for Kate before I explain that her mom’s at work tonight, and that we’ll be having dinner as a twosome. She’s psyched to head out, though, and so I gather the day’s masterpieces (unfinished raviolis in her lunch bag and a scrawled-on picture of a squirrel, HELLO JACKSON POLLACK) and bundle her into her purple coat.  She says goodbye to Emily, the afternoon caretaker, with a cheery “Shabbat Shalom!” – I’m guessing Piper is likely the only kid being raised by two Quaker parents who knows to say that on Fridays, but when you’re attending a day care named Gan HaYeled, this is perhaps unsurprising, and totally charming – and we run out to the car with a rain squall bearing down on us overhead.

We drive home, Piper pointing out stop signs and busses, and telling me when lights have turned green. We get a brief, blatting shower as we park, and Piper insists that she can hold the umbrella as we walk up to our front door … and she’s right. Holding it upright and going up the steps proves a challenge, though, so I take the umbrella down and we both burst in the door dripping. We marvel at the new couch and chairs, which showed up only this morning, and then I go to transmute several days of base-metal leftovers into one new golden meal for the two of us. Piper leans on the new couch, ransacks her room, rummages through some kitchen cabinets, and finally settles down on the kitchen floor to recite Maurice Sendak’s “Chicken Soup with Rice” to me.

Meanwhile I’m chopping up a shallot; some leftover cooked chicken from the batch we raised, killed and butchered this summer; and a bunch of broccoli. I sautée the shallot with some garlic, and Piper asks to smell the garlic.  Then she wants to smell (and sample) the chicken. Then she wants to watch me stir the rice in.  As I fetch out the usual bottles to jazz up the stir fry, she requests a taste of each and its name: soy sauce, mirin, rice vinegar, sesame oil.

We sit down at the table and I serve her a big scoop of the fried-rice-and-stuff; on a whim, I put a few drops of each of the four seasonings on her plate, too.  She spends easily the first five minutes of the meal dipping an index finger into each one. “They’re not spicy!", she reports, before going back for many repeats on all four: especially the puddle of mirin, natch. Then she tries dipping pieces of broccoli into each one in turn and tasting them that way. Having finished her broccoli, she finally hoovers up the chicken and rice. That, I figure, earns her a little dessert, so I get out a frozen peach pop for her and prop the iPad on the table.

As she ate dessert, we video chat with the Massachusetts Hankins, who proudly display their Halloween costumes and play peekaboo with an amused Piper, who keeps proclaiming, “I’ve got a peach pop!”  Then, off for teeth brushing. Piper’s developed some occasional and (thankfully) mild resistance to helping out the tooth brushing process, but after a request from me to help her get to book-reading more quickly, she leans back and says “Ahhh,” all the while signing the ASL word for “help.”

Three decently long books, as Piper fitsherself under my arm: “How to be a Baby,” “Lots of Dots,” and the last story in “Owl at Home”: “Owl and the Moon.” I turn out the light and do the bedtime ritual, which begins with “What a fun day!” and a recounting of everything (that I know) she’s done that day, with especial attention paid to friends and meals. We talk about what we’ll do tomorrow, and then I ask her for a few of her animal sound renditions. Tonight she happily neighs as a horse and chatters as a dolphin; she laughs knowingly but won’t perform when I ask her about crows, and she giggles when I ask about whales, because that’s my cue to make the lowest rumbles and the highest squeaks I can. Then it’s serious business: what does Mama say?  “I love you.”  What does Abba say? “I love you.” What does Piper say?  “Dawa.” And with that, I ASL-sign I-love-you-all-time, wish her a good night, and leave the room.

And then go back to her door 30 seconds later to tell her that no, she doesn’t need any orange medicine. (the kid ibuprofen we use apparently tastes really good, but it’s only for actual tooth issues.)

And then I’m back 30 seconds later with a sippy cup of water, at which point I say firmly that we’re done and good night: I’ll see you in the morning, kid, and don’t call unless there’s blood, flames or flashing lights.

It’s not that any of this evening is particularly remarkable. It is, in fact, that this is a thoroughly typical evening that makes me want to record it, lest it be lost in a generally pleasant blur. It’d be way too easy to only jot down the screaming fits or the Calgon-take-me-away moments… but man, these kinds of gently curved few hours together make me astoundingly satisfied to be a father.

I wonder whether we’ll have these quiet periods of awesome when the second one comes along? 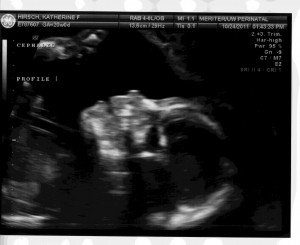