This is a note for my children, but this seems as good a place to leave it as any.

Ray Bradbury wrote many short stories, and one of them has both stuck with me and been resurfacing, recently: “Season of Disbelief.” It’s one of the untitled many collected in “Dandelion Wine.“

An older woman, Mrs. Helen Bentley, tells a bunch of young children for whom she has just bought ice cream that she was young, too, once. They don’t believe her, and rather huffily tell her they’re not supposed to listen to people fibbing. She tries to convince them that she was vital, energetic, naughty: they believe none of it. The next day, she brings in photos, a ring she’d had as a girl, a hair comb.. and the children callously walk off with them, laughing with casual cruelty as they continue to tell this woman that she’d never been young, that she must have stolen the pictures and the comb. They’d never seen her young, and so for them, she has always had gray hair, fragile skin, a slow walking pace. And then, a night of contemplation and remembering her dead husband’s encouragement that she should live more in the moment. She had, throughout her life, saved things – photos, ticket stubs, fairground trinkets – in an attempt to keep the experiences real. Her husband, in memory, speaks to her:

_"It won't work," Mr. Bentley continued, sipping his tea. "No matter how hard you try to be what you once were, you can only be what you are here and now. Time hypnotizes. When you're nine, you think you've always been nine years old and always will be.  When you're thirty, it seems you've always been balanced there on that bright rim of middle life. And then when you turn seventy, you are always and forever seventy. You're in the present, you're trapped in a young now or an old now, but there is no other now to be seen."_

_It had been one of the few, gentle disputes of their quiet marriage. He had never approved of her bric-a-brackery. “Be what you are, bury what you are not,” he had said. “Ticket stubs are trickery. Saving things is a magic trick, with mirrors."_

So then the twist comes – Bradbury frequently had gape-inducing finishes to his stories in this era – as the next day, Mrs. Bentley comes out to her porch and agrees with the children: she’d never been young. She’s always been old, and never anything other than what she is today. The present moment is all there is, and that’s that. She burns her trunks of theater programs in a bonfire, declares that she has been seventy-two for the last fifty years, and then sits with the kids and eats ice cream with them, everyone of them smiling and happy. Summer envelops them all.

As a teenager, I read this with some mild discomfort. These kids had stolen the last shreds of this woman’s long-past youth with their disbelief! The full tragedy (or is it enlightenment? or both?) of what Bradbury was describing didn’t become clear to me until … well, just recently, watching my children make each other laugh, at the dining room table. Sydney – whose middle name is Bradbury primarily for Kate’s marvelous aunt, but just a little for Ray – is in a phase of laughing when we mimic her noises. She blows a raspberry, I blow one back, and she peals with laughter, showing the smallest pair of neatly serrated teeth. Piper chimes in, and Syd’s grin grows even wider. She giggles. Piper giggles. Kate and I blow raspberries, belch thunderous belches, and look at each other as if the circus has come to town and is eating dinner with us: in a way, they have. But if they are so young … what does that make us? When did we stop being the vibrant children in our own story, and when did I become Mrs. Bentley?

I am young only in certain contexts, now, and old in others. I am just days away from turning 40, which means I’m well below the median age where I work. I wade down to the radio station through tributaries of commuting college students, their earbuds matching mine, their hats’ earpieces dangling in the wind just as mine do. I am not the only man with a beard by a long shot. And I occasionally wonder, dodging fat-tired bikes on the path: Do I even come close to passing? How quickly do the runners peg me as Old Guy, as of course I must have done a million times to people, without thinking, when I was in college?

It’s a laughable notion that I could pass unnoticed among college students 20 years my junior, of course, but I bet other contemporaries will at least understand where the feeling comes from. I don’t, truth be told, feel markedly different on the inside than the person I was back in 1993.

More experienced, definitely. More aware of my own desires and limitations, more familiar with many more places in the world, but still someone who enjoys most of the same things I did then: food with friends, sophomoric humor, the books and movies of nerd-canon, working together to make things better, video games, a weirdly-focused drive for neat organization that begins and ends with wires, sound, lighting and improving systems. I intuitively feel like the same person I was then, even as I know, certainly, that intuition is composed of complete bullshit.

“Who are we, but the stories we tell ourselves, about ourselves, and believe?", says writer Scott Turow. He’s got his finger on something, and perhaps the same thing Bradbury was getting at: we tell ourselves that we are one continuous person stretching from adolescence to the present day, and, gullible to a fault, we believe ourselves. 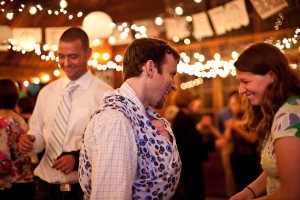 I find myself wanting to say to Piper and Syd, even as I appreciate that they won’t ever believe it, that we were young, once: as young as they are now. That as I write this, their parents are lusty, goofy, idiosyncratic people who primp and curse and are able to hold down conversations about today’s foreign policy and red-carpet premieres. That we were once completely inexperienced parents trying to figure out how best to transform our duo into a quartet.  That we liked fart jokes and stupid YouTube videos and doughnuts as much as I’m sure they will. That every eye roll we have shared about our own parents’ ineptitude with the gadgets of the day will of course be repaid double, karmically. That they, our children, began from our own impulses and cells made flesh, but that they are also the students of their own experiences in the world, now and forever. That by the time they are old enough to read these words, we will already have always been old, to them and – maybe, by that point – to ourselves, the still sap-green moments in which I am writing this now gone as brittle and charred as yesterday’s ticket stubs in a bonfire.