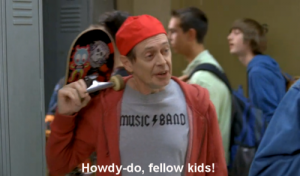 A few friends spoke with me yesterday about the concept of passing-as-young, and I needed to jot down that I’m 100 percent clear that from the outside, nobody who’s 39 looks like someone who’s 22. (or very few do, at least, and I’m emphatically not among them.)  What I find disorienting and interesting is just how easy it is to feel, on the inside, as though the concerns and interests I’ve got still mostly match those I had when I was 22. The 22-year-olds passing me on the bike path surely have no such illusions.