For those of you wondering what happened to the posting, I had some technical difficulties with Adam’s blog and have been posting to his live journal community. For an update on the last 2-3 days go to:

It’s open to everyone and you don’t have to be a member of live journal unless you want to leave a comment.

We were hoping that Adam would get his G-tube today, but after having his feeds held starting at midnight, his nurse restarted them just before 7 pm. The GI service got too busy so it should happen tomorrow. After that, Adam will likely be transferred back to the step down unit for vent weaning. Adam continues to be psyched about the tracheostomy, and only needed a little pain medication last night. We continue to work on our lip reading skills, and Adam had us change the laser pointer over to a pair of Groucho glasses (sans crazy eyebrows and nose). He looks a little like Clark Kent with a gun site attached (and with crazier hair).

He continues to be frustrated with the Guillain-Barre, which still seems to be progressing. His legs and arms are weaker and he wanted me to report that he’s down to being a “head in a jar and one elbow” and that he’s “still fading, dammit”. Adam also described it as feeling “gone away” and that he feels surrounded by meat, not his own flesh. I think we were all fooled by his plateau, but the doctors assure us that this continued decline can happen after a plateau in a more nasty form of GBS. A more involved nerve conduction/muscle test (EMG) may happen tomorrow or Thursday and that will help Adam’s doctors predict how long this will continue before the improvement starts.

For now, we wait. Time passes slowly for Adam so we’re trying to keep him occupied with audiobooks, DVDs, range of motion exercises and conversation (although that can tire him out, especially when he’s trying to mouth his words).

Here are some pictures: 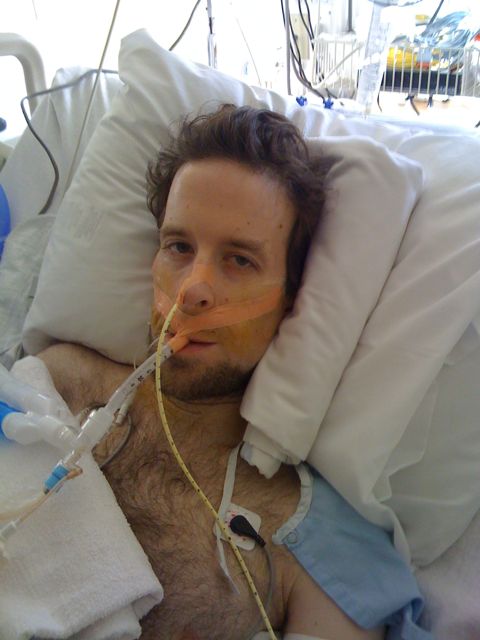